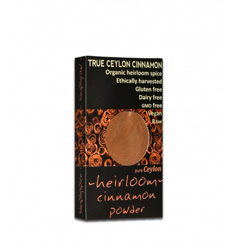 What is the difference between cinnamon and cassia?

Although related, cinnamon and cassia are not obtained from the same plant. They should be treated as separate foods, both from a nutritional and a health standpoint. Scientifically speaking, there is only one true cinnamon, which is most commonly called “Ceylon cinnamon,” and comes from the plant Cinnamomum zeylanicum. An alternative scientific name for Ceylon cinnamon is Cinnamomum verum, which simply translates as “true cinnamon.”

Ceylon cinnamon is typically more expensive than any of the cassia versions, and it is also the cinnamon more closely associated with potential health benefits involving blood sugar regulation. However, since both forms belong not only to the same family of plants (Lauraceae, the laurel family) but also to the same genus (Cinnamomum). They share many characteristics, and in some studies on rats and mice, the cassia cinnamons have shown blood sugar regulating ability as well.What true cinnamon and cassia do not have in common is their coumarin content. Coumarins are naturally occurring plant components that can have strong anticoagulant properties. Because our blood needs to maintain its ability to coagulate in times of injury, excessive intake of coumarins over a prolonged period of time can pose health risks. While the level of naturally occurring coumarins in Ceylon cinnamon appears to be very small and lower than the amount that could cause health risks, the level of naturally occurring coumarins in the cassia cinnamons appears to be higher and may pose a risk to some individuals if consumed in substantial amounts on a regular basis. For this reason, organizations like the Federal Institute for Risk Assessment in Berlin, Germany have recommended that large amounts of the cassia cinnamons be avoided. Unfortunately, there is no way to tell the difference between cinnamon powders that have been made from Ceylon/true cinnamon versus the cassia cinnamons. If you are buying cinnamon powder to use in a recipe, we recommend purchasing a cinnamon product that identifies the source of its cinnamon or calling the manufacturer to obtain this information. In the case of stick cinnamon, however, there is one feature of the sticks you might want to look for in order to determine whether your cinnamon is true cinnamon or cassia cinnamon. That feature involves the texture of the sticks when you look downward at a stick so that you can see the end. When cinnamon sticks are rolled from the thick bark of the cassia plants, they look exactly as described-a one-piece, thick bark layer that does not show multiple layers of any kind. In the case of Ceylon cinnamon sticks (true cinnamon), since the plant bark is thinner, you may be able to see multiple layers of a thinner bark.That thinner layering of bark is one indication that your cinnamon sticks are made from true cinnamon. After finding true cinnamon sticks, of course, you can use a coffee grinder or a mortar and pestle to grind the sticks up into a powder. When used in ordinary seasoning amounts occasionally in the diet, it is unlikely that you will face added health risks from the cassia cinnamons. We do not see a reason to avoid the cassia forms of this spice when consumed on this limited basis. However, if you are an avid cinnamon lover and likely to consume large amounts of cinnamon, we recommend Ceylon cinnamon (true cinnamon) as your best choice